We're saddened to report that 5645 has been removed from service. The car developed a hot box with bearing melting last week. Inspection revealed that the journal boxes are skewed in the frame indicating box and/or slider plate failing. The car will require extensive truck work, similar to what John has been doing for 3001. At this point, with both of our small shop trucks under 3001, we've decided to place 5645 in storage and prioritize repairing 1326 which will be a shorter repair time-wise. We're ordering a cart to aid in safely dropping 1326's armatures into the pit and hope to start work by fall.

On a happier note, we welcomed Steve Giarrusso to the shop yesterday. He replaced the failed compressor switch on 355. He then joined Kelly in performing routing maintenance on 16. Galen completed temporary truck repairs for the car and it has been released for limited service. We hope to see 16 running one trip a week for the public. It has also be designated as the official training car for new motormen.

Scott completed varnish work in 836 and it will be running regular service, replacing 5645 as the main closed car. We've also released 65 to limited service, allowing it to complete one trip a week. Both 16 and 65 have old rattan seating which cannot stand up to the rigors of coronavirus cleaning, so the cars must quarantine after meeting with the public as their method of disinfecting. The Operations Department will schedule the cars to ensure adequate time for the virus to die off between passenger trips.

Tad has completed removal of the paint from the undersides of clerestory sides on 169. He also completed primer work on the east end wall. 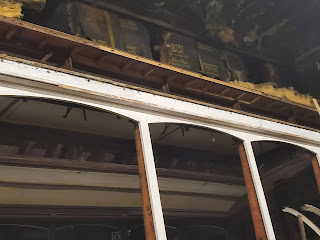 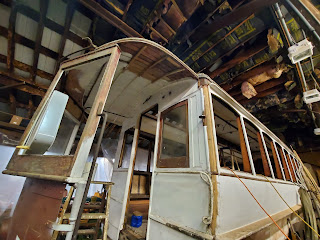 Primer work is complete on east wall of 169


Lou completed a window repair on 836 and made a new gasket for 18's brake stand. 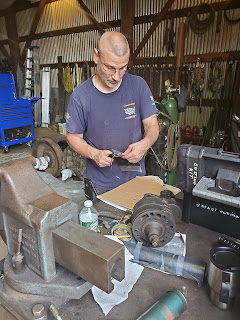 Lou works on cutting a new gasket for 18