This weekend we were delighted to host the annual NEATO (North Eastern Alliance of Trolley Organizations) Cabin Fever winter get together. The shop came in early Friday, hoping to get our CA&E interurban 303 out, however, the bitter cold thwarted us, preventing the locomotive's batteries from charging up. By the time we finally got the little engine that could started, it was too late in the day to begin the intense inspections 303 needed after a 20+ month stint in dead storage. We also feared the locomotive wouldn't start a second time, which would prevent us from putting the car away later on. The diesel has developed a new leak in the fuel pump and a leaking oil line since last weekend. John was able to patch the oil line, but more work is needed. The necessity for a battery rehab was reinforced.

Our initial plans foiled, we opted to provide more trips than originally planned on Conn Co car 65 instead. 65 remained under shop supervision throughout the event, which proved it's worth as it popped a breaker for unknown reasons coming home on its last trip of the event. The car will be inspected before further operating. We were able to get 5 of our motormen behind the controls for the first time and let our Operations Manger take his first trip on the car since he was the last one to run it in 1997. Our 3 junior motormen/shop team members also had the opportunity to run the car. We were happy to have all 4 of our age 18 and under crew members present for at least part of the festivities on Saturday. 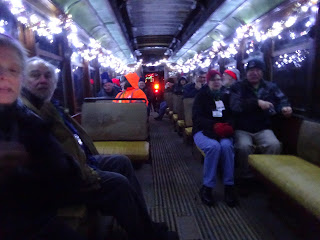 Our guests enjoy a trip on 65 Friday night

Sadly, we had to place 836 out of service early Saturday morning. It blew a fuse while being pulled out for operations and inspection of the car found a high bar in the air compressor. We'll need to remove and rebuild the compressor before the car can return to service.

Thank you to everyone who came for being wonderful guests (and good sports about not being able to run 65). We'll see you next year in Baltimore!
Posted by Kelly Buffum at 1:27 PM No comments:

Email ThisBlogThis!Share to TwitterShare to FacebookShare to Pinterest
Labels: 65, 836, Diesel 1

Today we performed inspections on cars 4 and 355 and they are now ready to run for our Cabin Fever guests next weekend. 355's air governor got an adjustment as it had drifted out of range. We also did some switching in front of Northern Barn which will allow us to treat our guests to a very special car if the weather allows. Jayden got to run the diesel for the first time as part of the maneuvers. 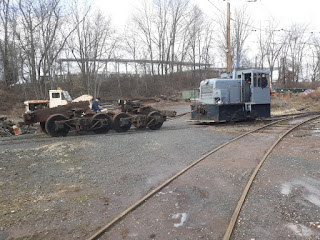 Lou spots the box car trucks as they're moved down the hill. Galen Semprebon photo


Jayden remodeled and drafted the segment Westfield Technical Academy reverse engineered for us last year. Wil 3D printed it and it was successfully test fitted in 1326 today. 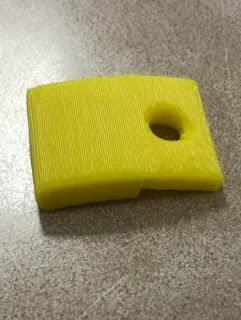 Posted by Kelly Buffum at 6:52 PM No comments:

Email ThisBlogThis!Share to TwitterShare to FacebookShare to Pinterest
Labels: 355, 4

We're happy to report that car 5645 is repaired and ready for our Cabin Fever visitors who will be coming in a few weeks. Yesterday, Tim, Galen, Rob, Sully, Lou, and Kelly replaced brake shoes, lowered the car back onto its truck, and reconnected the motors and brake rigging. Since the jacks were to hand, the other end of the car was lifted and the center bearing and slider plates lubricated. 5645 was taken around North Road curve to verify smooth operation and returned to its home in Kelly Barn. 355 is now up in the shop for a little TLC. It and 4 will be given checkups next weekend.
Posted by Kelly Buffum at 10:59 AM No comments: