With temperatures reaching into the upper 60s, Saturday was highly productive.

In the morning, John, Bruce, and Kelly helped with cleaning up and moving cars inside the visitors' center. The caboose is in it's new home, 10 has been untarped after its brief stay outdoors, and 65 is back inside after having spent Winterfest under the train shed. We're excited to relate that visitors will be seeing some new cars in the display hall this season. Which new cars? Well, we're not about to spoil the surprise.

In the afternoon, Kelly introduced Motormen Roger Pierson, Sully Mrowka, and Larry Lunden to car maintenance. The team covered how to oil journal bearings and car motors and how to check a car's compressor to ensure it's in good condition. Larry also got to see the inside of a controller for the first time and learn how they are cleaned and how they could come to be damaged by poor operation of the cars.

By the end of the afternoon, both of 5645's controllers were cleaned, all four motors were oiled, and all eight journal bearings were oiled. 1326 also had its journal bearings oiled, two motors oiled, one controller cleaned, and its compressor checked. The Motormen seemed to have enjoyed themselves while developing a new appreciation for the work the Shop performs in order to keep the cars rolling. 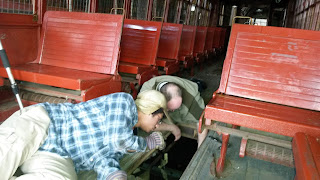 Sully and Roger oil one of 5645's motors 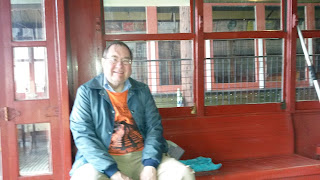 Larry pauses for a break

Posted by Kelly Buffum at 10:13 AM No comments:

Email ThisBlogThis!Share to TwitterShare to FacebookShare to Pinterest
Labels: 1326, 5645

The shop continues to work inside the Northern (aka 1500).

Here's some of the intricate inlay work in the dinning area that has been cleaned up and revarnished. This is the level of beauty that can be coaxed out of the remainder of the car. Keep this in mind 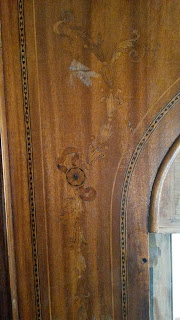 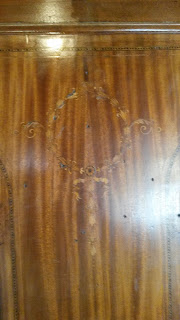 Bruce and Gary have been at work removing the cracked and splintering outer wall layer in the kitchen. This will be covered with nice, new 1/8 inch material. The hole cut into the wall by the previous owner will also be covered up. Eventually, the partition between the bathroom and kitchen will be recreated. 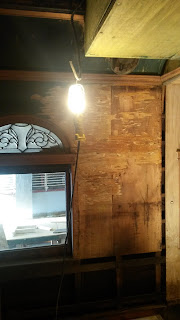 The orbital sander made quick work of stubborn green paint. 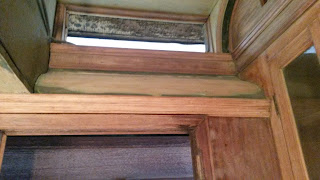 Terrible green and white paint has been removed from the majority of the kitchen/bath. Ceiling sections display cracks and will have to be replaced. The room's doors have been removed to give a bit more space to work in. While they're down, their brass hinges and knobs will be polished. 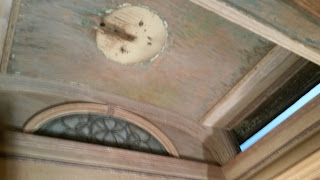 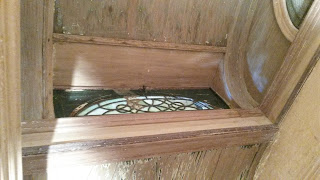 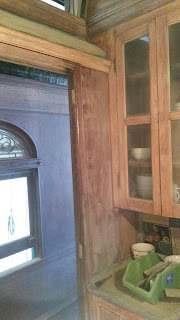 Posted by Kelly Buffum at 4:16 PM No comments: