355 received its maintenance last weekend. The car has been placed in reserve status due to increasing damages on the underside from the heaving of the barn floor. We've decided to take advantage of having the car out of service and Scott W has started varnishing the seats. Boy does the car look better already! And he's just getting started. 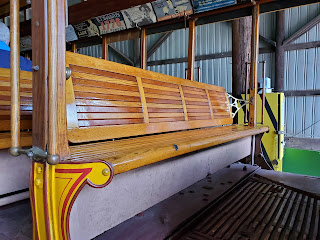 Varnish work in progress on 355


Tad completed primer work on 169's east end, giving the car its first big visual progress jump in far too long. He's planning on tackling the work around the clerestory next and we're delighted to see the project moving ahead once again. 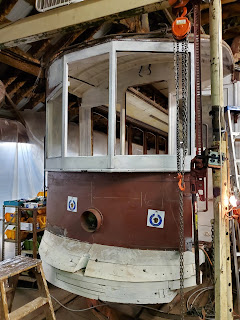 
Elsewhere, Adam continued paint work on 18's roof. John is finishing up work on the journal boxes for 3001's east end truck. Galen cleaned out the pit, a needed job so we can roll our nice new pump cart around while working on 1326. Kelly finished up the wiring work under 1.

We were happy to have Scott Kritzky stop by to visit with his son William who's gotten a lot bigger since the last time we saw him. Hopefully we'll be seeing them again soon.

Oh and take a look at the final product of 836's seat refurbishment! We caught the car out in the sun to really show off the great work Scott and Galen did. And, by the way, they did all this in the dark back of the barn working with only drop lights to see by. 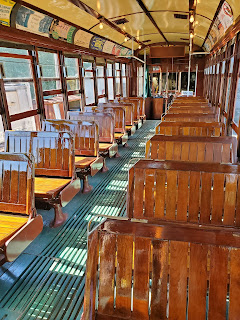