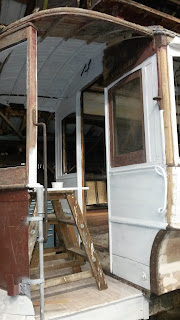 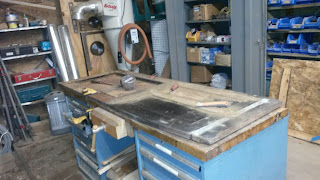 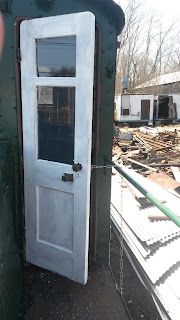 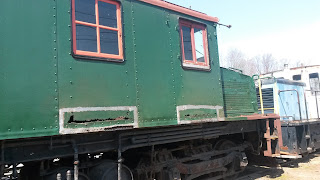 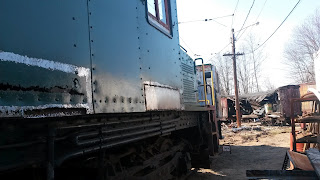 
Pat has removed the troublesome starter from the auger truck. A rebuilt or new starter should be installed next weekend to get the truck back up and running for the SC&ET department. The truck is used to create holes for setting new telephone poles along the line to support the overhead wire.
Posted by Kelly Buffum at 11:08 AM No comments:

With a beautiful spring day, lots of work was accomplished.

Kelly, Brian, and Wil greased the motor gears for the majority of operating fleet.

The crew also made great progress on 18. Larry and Fred painted the west end cow catcher and window frames black. Galen prepared the locomotive for the installation of the new brake pipes and worked to patch the hole in the roof. Rex and Jordan vacuumed out the interior of the locomotive, clearing years of debris from the floor and ensuring there were no fire hazards inside the electrical boxes and controllers. 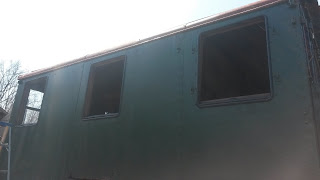 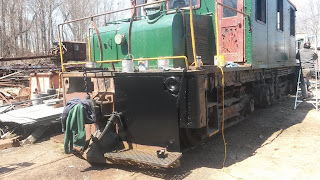 
John has removed one of the steps from the side of 3001 where the treadle door will be eliminated. Kelly got back to work on cleaning up the east end controller. Fred also got in a bit of work removing paint from 169's east end platform ceiling.
Posted by Kelly Buffum at 7:15 PM No comments:

Email ThisBlogThis!Share to TwitterShare to FacebookShare to Pinterest
Labels: 169, 18, 3001 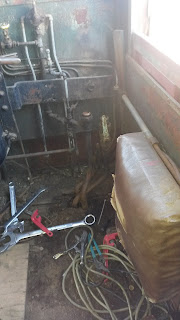 While operations began last weekend, worked continued on maintaining operating fleet. Kelly, Wil, and Rex cared for car 355. Galen helped as well, replacing a defective brush holder in the compressor. Locomotive 18 was placed back in front of the shop where we hope to have time to work on it again soon.

Yesterday, we were happy to see Julia Saari-Franks and Christopher Franks, current participants in the Trolley Care Program. They helped Kelly maintain cars 4 and 16, finishing the spring maintenance for the operating fleet. They then moved on to scraping paint on 169 while Kelly continued cleaning up 3001's east end controller. With spring weather arriving, we're all glad to be back out in the shop.

John has begun planning the year's work for 3001. Fred and Bruce continue to clean up seat bases for the car. John and Kelly also discussed potential other projects for the year, including some much needed floor painting for operating fleet.
Posted by Kelly Buffum at 10:12 AM No comments: