65 has seen some important physical touches put in place over the past two weeks. The last grab iron was installed, a door was refitted, tack stripping was installed to hold the roof membrane in place, and the repaired motor hatches were leveled to the floor. All this meant the crew was able to take the car out on a test trip down the line. Galen, Kelly, and Wil were joined on the car by Chief Motorman Roger Pierson and motorman Ryan Trombly photographed the event. This was car 65's first trip down the line in over 20 years. The car performed beautifully with only a few minor issues noted as needing work, such as the west end whistle not functioning. When the car returned to the yard, the crew hauled its seats out of storage and placed them in the car in preparation for them to be installed over the coming weekends. Once the seats are in place, we will be able to test the heaters. The crew is short 3 bench cushions for the car. A temporary solution will be devised. 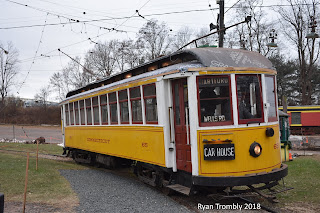 65 at North Road curve prior to departing for testing
Photo: Ryan Trombly 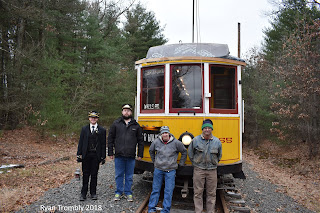 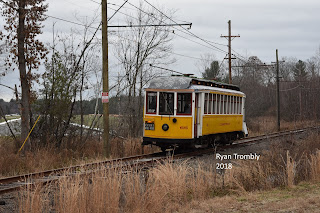 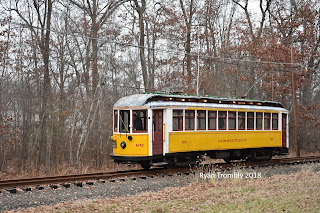 Heading outbound on 65 as the car is brought to full speed for testing
Video: Wil Gambardella 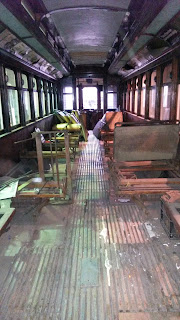 John has been at work on Diesel 1 and one area of the locomotive now has fresh primer. The crew decided the diesel will be painted red, leaving the frame black. 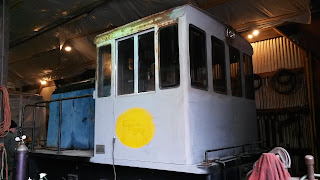 Diesel 1 is being primed

Car 16 has been designated out of service until spring. As the car does not have heat, it is experiencing issues with its air system freezing due to the cold weather.
Posted by Kelly Buffum at 11:19 AM No comments:

Email ThisBlogThis!Share to TwitterShare to FacebookShare to Pinterest
Labels: 16, 65, Diesel 1

Taking another shot at the rubber roof membrane, Galen was able to complete 65's roof. The material is much more cooperative when it is cold out. 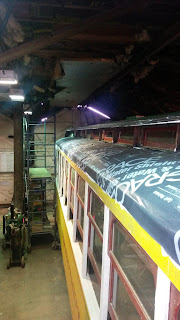 65's roofing is all in place


3001 is being tarped off so it can be heated this winter, allowing John to continue work. 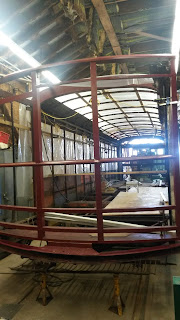 3001 is being prepped for winter 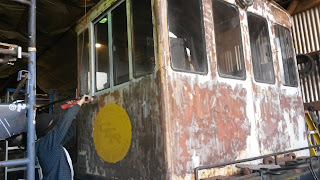 Adam grinds old paint off of the locomotive 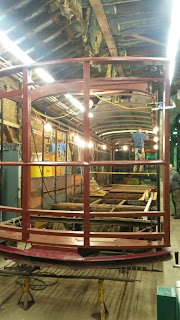 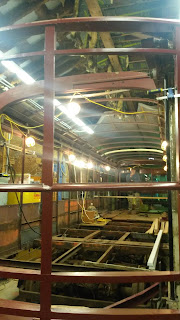 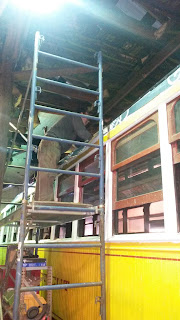 Diesel 1 has been moved into the shop behind 3001. Some initial inspections have been performed to assess the work it will need this winter. It will be kept heated and ready to serve until after Winterfest. Work on the locomotive will begin in January.
Posted by Kelly Buffum at 11:45 AM No comments: