John continues to work his way through the piles of components inside 3001. In the meantime, Kelly and Pat begin removing the old tar paper roof. Unfortunately, it is discovered that the car will require at least a partial roof replacement or, more likely, a completely new roof. Much of the wood under the tar paper is brittle, some has rotted, and there are several holes.
Elsewhere, Fred is busy cleaning up the inside of 16 where the Rails to the Darkside cast has left some props and belongings. 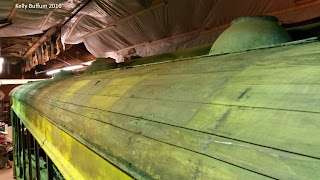 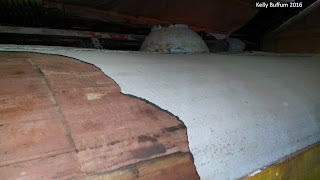 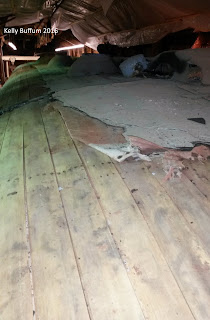 Posted by Kelly Buffum at 3:23 PM No comments:

Email ThisBlogThis!Share to TwitterShare to FacebookShare to Pinterest
Labels: 16, 3001

Work is beginning on cleaning up 3001 and sorting through all the pieces inside. Kelly swept several pounds of dust from the roof then removed the rope guard and drip strips. John has gotten lights strung inside the car and is busy cleaning it out, putting all the pieces neatly away into the storage pod. 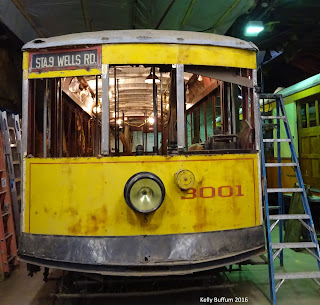 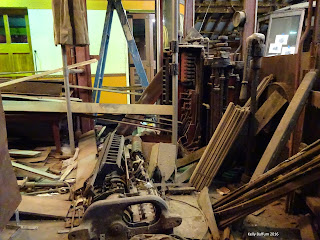 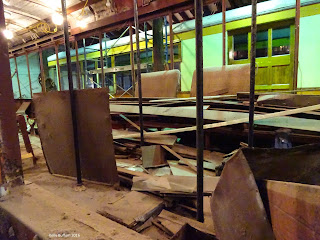 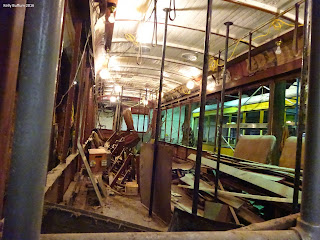 Posted by Kelly Buffum at 3:12 PM No comments:

It's finally happened, 3001 has been pulled out of the back of Northern Barn and delivered to the shop for restoration.

We've already come to a few conclusions:
1) It looked a lot better in the dark of the back of the barn.
2) There are a lot of pieces. Some of these pieces belong to other cars. None of the pieces are labeled.
3) This might take longer than originally anticipated.
4) It's going to be beautiful when it's done. 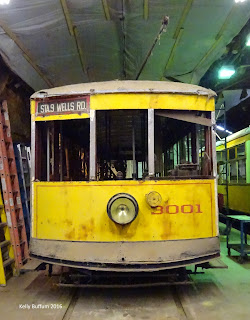 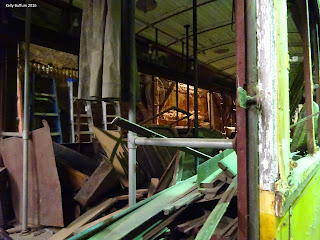 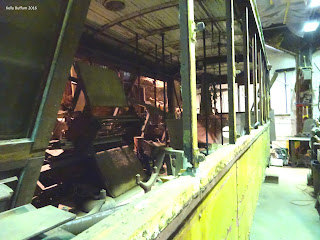 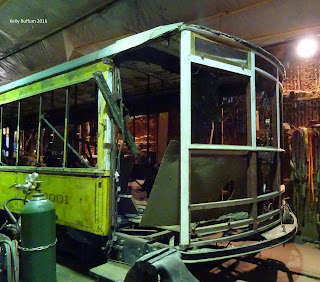 Posted by Kelly Buffum at 2:55 PM No comments:

A Flash of Light

Late yesterday afternoon Operations reported that 1326's west end controller emitted 'a big flash of light' as they were bringing it home. The car was put in the back of the barn and tagged as out of service pending further investigation.

Galen and Kelly were both in for other reasons, Rails to the Darkside clean up and operating respectively, so decided to take a quick look and see if the source of the problem was immediately evident. It was.

Kelly opened the controller and was confronted by the sight of arching damage to the segments. 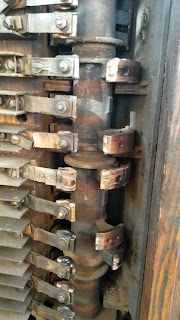 This was traced to a finger on the reverser barrel that was not making proper contact. Galen removed this finger and bent it back into shape while Kelly gave the controller a good cleaning. The east end controller also got a quick cleaning while they had the car out of service. 1326 was delivered back to Operations by mid-afternoon, all damages repaired. 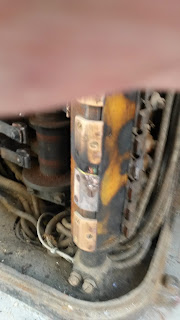 More images of the damage resulting from the bent finger. 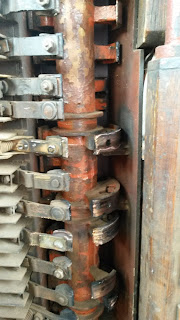 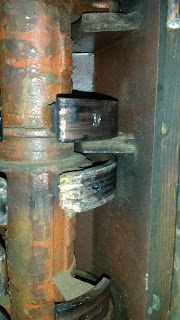 Posted by Kelly Buffum at 10:51 AM No comments:

After almost a year, the shop has finally gotten 355 back for some much needed cosmetic work.
During the week, John came in and resprayed the yellow on both ends, covering the grey primer patches the car sported throughout the operating season. Today, it was time for detail work. Fred fully repainted both bumpers, then touched up the remaining black paint on the car. John touched up white paint. Kelly touched up yellow and red while Lucian began a complete repainting of the floor. Shannon polished brass details. 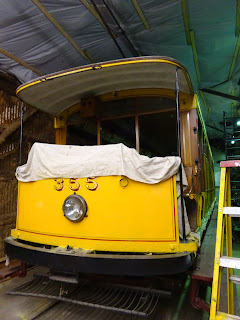 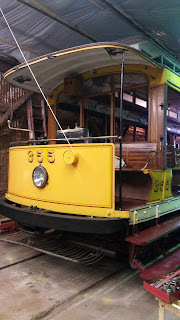 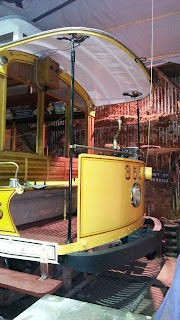 Posted by Kelly Buffum at 11:18 AM No comments: