For the past two weeks, Car 65 has been getting a facelift in the shop. The front of car was almost completely disassembled and replaced with all new wood planks on the front of the car giving it a fresh look. While inspecting the inner wall behind the outer planks, some decay on the wiring of the car was found. During the replacement, those wires were replaced to prevent the further decay of the wiring on the car.

Once this project on 65 is completed, the shop will refocus back onto car 3001 to continue work on the restoration.

For the Halloween Season, car 5645 has been running almost daily to help break in the new components that were installed during the cars time in the shop. This car has been running without issue since its release back into operations.

During November's off season, the entirety of CTM's property has been decorated with thousands of Christmas Lights. On the mainline, crews have been working very hard to complete track repairs to Hartman's Siding as well as restore the overhead power out to Station 9. Both of these projects have been happily completed and Winterfest of 2021 will be a great show!

Posted by Wil Gambardella at 4:00 PM No comments:

Email ThisBlogThis!Share to TwitterShare to FacebookShare to Pinterest
Labels: 3001, 5645, 65

Thanks to a huge push from the shop department and all the dedicated volunteers, car 5645 returned to service and debuted on September 4th for CTM's 81st Anniversary.

On that day all of the running cars in the fleet came out for some public love including Line Car 1, S193, and 303.

For about 2 years now, 5645's controller has been blocked into the series notches due to a shorting issue within the controller. Now with the car's former extended stay in the shop, John is confident he found the issue with the controller and plans to make the required fix.

303 has been moved out of Northern Barn and currently waits on the shop lead so the car's motors can dry out once again after the wet summer season we've had. It is planned for the interurban to make a few special trips for the Winterfest Season.

If you'd like to see photos of CTM's 81st, check out the museum Facebook page for some of the amazing photos!

Posted by Wil Gambardella at 11:23 PM No comments:

Email ThisBlogThis!Share to TwitterShare to FacebookShare to Pinterest
Labels: 1, 303, 5645, S193

Over the last few weeks, we've gone over the work done to car 5645, and finally that hard work is coming to an end. This week in the shop, the door mechanism on the car was getting some much needed service as well as some cleaning. John also installed a new line switch into the controller of the car. Last Wednesday the car went out on a test run and most of the issues were resolved, with only a few remaining fixes needed. This car will be back in service for the 81st anniversary event on September 4th.

Car 16 returned to service this week and began running in public service with a new pole base roof section.

Car 3001 continues being worked on and specifically over these few weeks, work has focused on the field coils, motor cases, and work on the trucks.

Coming next Saturday is the Connecticut Trolley Museums 81st anniversary. This event has been named "Everything That Moves," and as the title implies, everything that CTM has in operating condition will be running in a trolley parade for the public. Be sure to check out the event on the CTM main page at www.ct-trolley.org

Posted by Wil Gambardella at 12:20 AM No comments:

Email ThisBlogThis!Share to TwitterShare to FacebookShare to Pinterest
Labels: 16, 3001, 5645

This week in the shop, 16 went up for a usual inspection. During this time, John found that the roof of the car was in need of work and possibly even replaced. Car 16 is currently still in the shop being worked on.

Also during this week, 5645 is getting some final touch ups and work done before its return to service by roughly the end of the month.

Car 1326's paint work is 90% complete with the rest of the work being touch ups on the red paint. Special thanks to Roger P. and his crew for being so dedicated to repainting that car!

In other news this week, for the first time in many months, our two Connecticut Company Cars are finally next to each other in Kelly Barn! These cars really turn some eyes while on display. 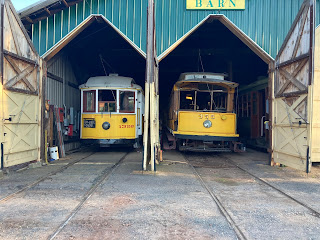 Keep an eye out, there are a lot more projects coming soon that you're sure to want to see!

Posted by Wil Gambardella at 10:40 PM No comments:

Last Monday, during the final run of the day it was discovered that car 355 had developed a brake issue. This issue was causing axle 3's brake shoes to drag on the wheel, rendering the car very difficult to move. John attempted to resolve the issue by using 355's hand brake wrench to manually release the handbrake, but was unable to fully release the handbrake. Roger P. from operations then brought the car up to the shop to receive a further inspection.

Thanks to John's hard work, the car was released into service on Saturday and ran without issue.

At the end of the day on Saturday, 16 was brought into the shop to receive some much needed work on the roof of the car.

Roger P. continues to work on repainting the sides of 1326 and hopes to be done within the next week or so. Most of the remaining paint needed on the car is the red striping down either side of the car.

Posted by Wil Gambardella at 4:27 PM No comments:

Email ThisBlogThis!Share to TwitterShare to FacebookShare to Pinterest
Labels: 1326, 16, 355

Over the weekend, thanks to the help of Operations Manager, Roger Pierson, Car 1326 has been receiving a new paintjob. After receiving the mixed paint from John, Roger, along with Wil, Jayden, David, and John Z. began painting both sides of car 1326. The red lettering was first covered in painters tape and will be redone after all of the yellow coats are completed.

Once one side of the car was completely painted, it was brought up to the shop where it was discovered a motor lead was broken, causing wheel slip as the car tried to climb the shop lead. John promptly found the issue and replaced the broken motor lead.

Posted by Wil Gambardella at 9:35 PM No comments:

Hi everyone! First I'd like to apologize for the lack of updates. We at the Shop Blog are definitely now trying harder to update this blog somewhat weekly. Anyways, onto the updates!

After Winterfest of 2020, 5645 went out of service for some major overhaul work. This work mainly consisted of the bearings and trucks. We hope to have 5645 back in service by August.

All the cars in the operating fleet have had their standard maintenance with cleaning controllers and bearings.

Car 3001's progress is coming along nicely. The bearings have been completed on the car and John is currently working on the motor cases.

In track news, Camillo has been making amazing progress on the mainline. 6 new ties have been installed at Station 8 and trolley service is now extended past Station 7 out to that point. Hartman's siding is also being renovated to facilitate the easier movement of cars in and out of the Visitor's Center.

Posted by Wil Gambardella at 8:46 PM No comments: