Today was an eventful day. Car 355 returned to service after having its compressor replaced. 836 is now in the shop for line switch repair. Adam began diesel locomotive operating lessons.

Adam, Kelly, and Harrison Bissonnette, from SC&ET, put polls on car 65. After some interior clean up, and a round of general lubrication maintenance, the car was put under power for the first time in over twenty years. It was quickly discovered that a main power wire was missing to the east end, rendering that controller inoperable, but the car received some light testing using the west end controller. Galen and Kelly were able to move it under its own power from the shop to Kelly Barn, where it will reside while 836 is repaired. Both brake stands exhibit air leaks that need investigation before the car enters service. Once the missing wire is installed, the car will receive full testing. The crew thanks Harrison for taking time away from his home department to help out today. 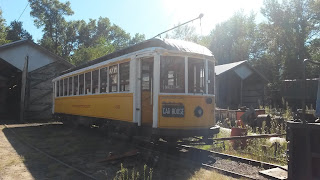 Email ThisBlogThis!Share to TwitterShare to FacebookShare to Pinterest
Labels: 355, 65, 836