The shop was delighted to have a record size winter crew of eight in yesterday. While Fred and John continued cleaning parts for 3001 up in the loft, Galen, Kelly, Wil, Bruce, Rex, and Larry made great progress in 1500. A large portion of the varnish has been removed from the bedroom walls. Additionally, the linoleum that had been put down in the kitchen, bath, and bedroom areas has been taken up, revealing the original wood flooring beneath. Torn and stained oriental carpeting was removed from half of the car's hallway. The stubborn ice box door was removed. Bruce took it home to be cleaned up and slightly trimmed so it will no longer stick. Wil also started cleaning up seat bases for 3001 so they can be repainted. 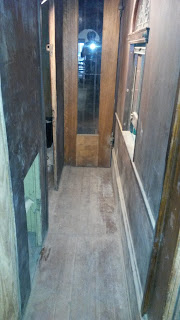 This half of the hallway is now carpet free. The ice box door has been removed for repair 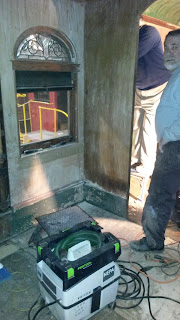 Aftermarket flooring has been removed in the kitchen and bath areas 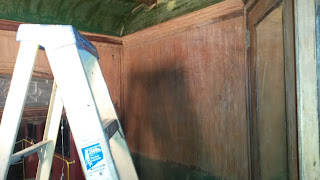 The bedroom walls are starting to look a lot better without a lot of their old, peeling varnish
Posted by Kelly Buffum at 11:07 AM