How straight is the trolley?

Now that all the window frame repairs have been completed and 3001 is structurally sound, John is checking how straight the car is. After running a line from middle of one end of the car body to the other, he compared the measurements to a line marking the middle of the frame from end to end. It turns out that the car has an approximately 3/4 inch twist from one end of the body to the other. This isn't all too bad. We'll try to to remove some of this twisting by pulling the body back into shape with come-alongs, taking appropriate measures to ensure we don't build up damaging stresses in the body panels. 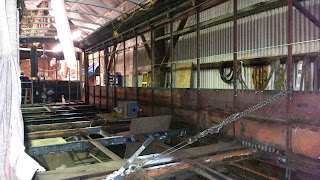 A brightly color string marks the middle of 3001's body. This marking was brought down the frame using a square and compared to the frames mid-point to determine twist.

Meanwhile, Kelly is cleaning up the various components of 3001's controller. The controller will be repainted and re-insulated as needed before it is rewired and reassembled. The rest of the team continues work on 169, removing old paint and repairing damaged woodwork.

An original builder's photo of 3001 has been located in the library. We have decided to return the car to its original two door configuration.

John has also been working on 2600's line switch. Installation has begun and the car will be back in service in time for Winterfest. 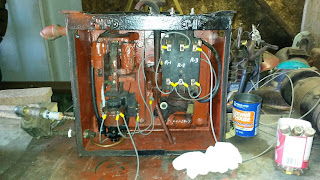 Email ThisBlogThis!Share to TwitterShare to FacebookShare to Pinterest
Labels: 2600, 3001