Larry and Kelly began the round of fall maintenance yesterday completing cars 836 and 16. Car 836 has already traveled almost 1,000 miles on the line this year, despite being out of service for over a month for extended maintenance in the spring. Car 16 went out for a test trip in the afternoon, running on three motors. This gives the car more pep, once it reaches parallel, which will be beneficial when the car is pressed into service as the cast car for Rails to the Darkside next month. We are still debating repairing the inoperable fourth motor as it is a multi-thousand dollar fix. The car likely needs extensive truck work as well which could become expensive and time consuming. 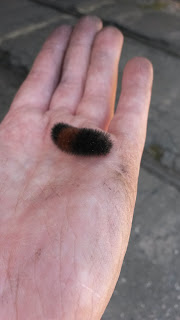 A sure sign of fall's impending arrival- a woolly bear caterpillar was found between the rails of track two just outside Kelly Barn. We moved it to the foliage on the far side of the parking lot after its photo op.

Fred and Paul worked on giving 2600's floor a fresh coat of paint. 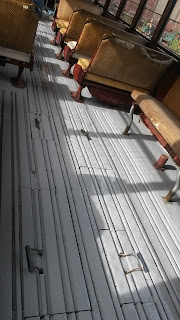 John continues steel work on 3001, removing old rivets. The shop will be attempting hot riveting next year as body work on the car continues.

Galen and Kelly MEG'd 169's motors. The west end unit tests fine while the east end indicates that it is wet. Once the east end is dried, we will likely have two working motors on the car. The truck was checked and found to be in tram. The car will need an entirely new wiring harness before it could ever run.  Although the car is intended to primarily be a show piece, we'd love to see it run it on special occasions. 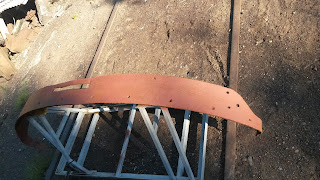