Galen and I took a nine day road trip to visit other museums. It was a great time and we had some amazing hosts. Here are the highlights:

NORM began offering passenger rides this year. One can ride a single ended Cleveland car like our 1201 on their demonstration track. A track extension is in the works and we look forward to visiting again in a few years to see the progress. 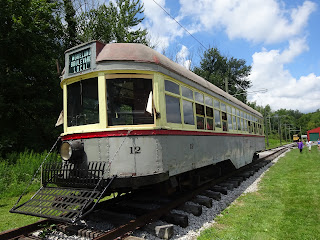 Take a scenic ride in a rail passenger car towed by diesel power. Trolley rides are also available upon occasion. 451's sister 450 lives here and is on display. Our conductor unfortunately taught Galen another railroad joke, beware all, but was delightfully enthusiastic and informative. 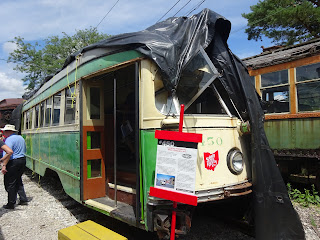 IRM is a mammoth operation. Be sure to plan for a full day when visiting. We'd like to thank Executive Director Nick Kallas for his gracious hospitality and thorough tour. We'd also like to thank Motorman F. Zimmerman for allowing us to operate 415 with him on the 5 mile long main line. We enjoyed the experience so much, we'd love to come back and qualify for operations, just to be able to fly along at 35 mph in a trolley again. IRM also runs steam and diesel in addition to trolleys. 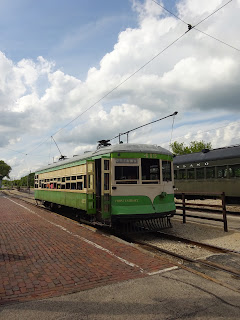 Mad River has a nice, small static collection, right along side a main railroad. We saw several trains pass as we viewed their nicely displayed collection. The area is in prime rail fan territory, if that's your thing. 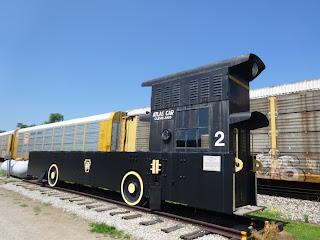 We arrived in the mist of the Washington County Fair. Despite this, Executive Director Scott Becker still ensured we received a warm welcome and restorer Bruce gave us a thorough tour. PA's line is an unusual broad gauge and their track has loops at both ends, allowing for an uninterrupted trip. We enjoyed ridding 1850's sister car, 1758, the best, but also rode a classic Johnstown car and a fully functional PCC. 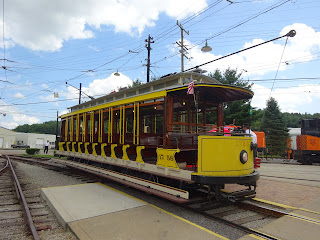 
Railroad Museum of Pennsylvania and the Strasburg Rail Road

The RR Museum of PA displays a wide range of steam and diesel equipment and the associated passenger, baggage, and work cars. There are many, well throughout displays that send one into the classic railroad era. The trip is not complete with out a ride on the Strasburg RR in a fully restored passenger car pulled by a steam locomotive. 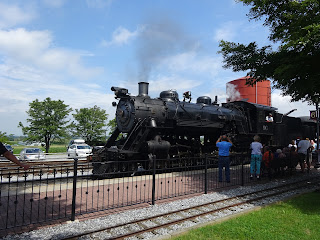 Engine pulls into the Strasburg station

Rockhill took a while to get to from the highway, but it was worth it. Dispatcher J. Gerhard gave us a warm greeting and we started our visit with a ride on an LRV, which was unexpected, but nice. Following the trip, we joined the group tour of the restoration shop and adjacent car barn. Then we took a ride on Johnstown 311, which is a double truck, Wason built, Birney car, like 3001. After our second trip, Motorman Louis showed us through the second car barn, which is being expanded and we were allowed to fully photograph 311 as an aid for restoring 3001. 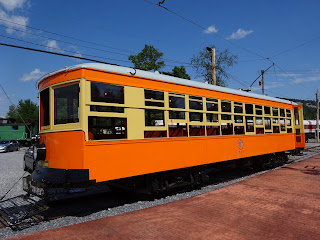 This is a unique operation. Their line runs right along the Hudson River, which provides beautiful views. One can get off the car at the end of the line and spend time at Rotary Park, returning to the museum on a later trip. This was the first time we'd ever seen a diesel powered trolley, but it works nicely for this museum. 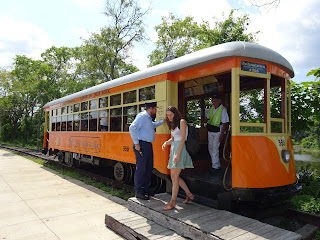 
We also visited the Columbus Zoo, the Auburn Cord Duesenburg Museum, the National Automobile and Truck Museum, the Indiana Dunes State Park, The Hershey Story Museum, and the Indian Echo Caverns, all of which we recommend visiting.
Posted by Kelly Buffum at 11:03 AM