Cleaning Up and Tearing Down

After a snowy and cold opening day, it's been a busy couple of weeks in the shop. Maintenance has been completed on all six of the cars in Kelly Barn and each has seen service down the line. With the exception of 5645 developing a dragging brake shoe last week, the season opened well. The issue was quickly resolved and the car returned to service.

We were happy to see Trolley Care Class Alumni Paul and Noah visiting last weekend, while Adam and Jim were in yesterday to lend a hand. They helped Kelly with the maintenance of car 4, then assisted with cleaning up the shop and doing a bit of work on 836.

We are also delighted to welcome a new member to the shop, Paul James.


The shop is taking advantage of having its hands on 836. The doors are being sanded down and re-varnished by John. Bruce and Paul have started work replacing the damaged window sash on the car's north side, which survived the last operating season held in place by duct tape. Fred began sanding down the tired looking window sills, in preparation for some touch-up painting. 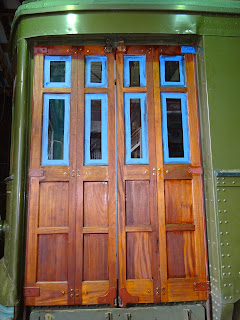 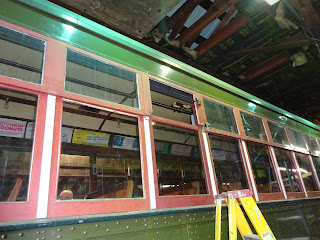 The damaged section of window sash has been removed


Work also progresses on 3001. John has stripped the remaining tar paper from the roof. Yesterday, the trolley bases were removed. Now, work can begin on removing the rotten roofing from the car. 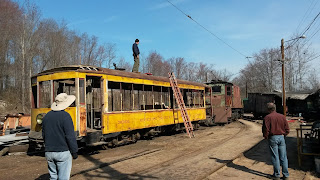 John waits atop 3001 for Galen to return in the front loader after depositing the first trolley base in the storage pod. Jim and Paul observe the action. 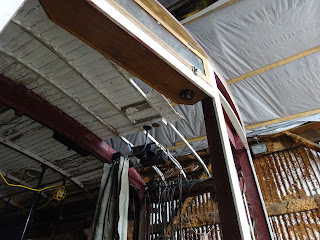 Roof removal has begun on the east end of the car
Posted by Kelly Buffum at 11:06 AM

Email ThisBlogThis!Share to TwitterShare to FacebookShare to Pinterest
Labels: 3001, 4, 5645, 836