We're Back - 2 Cars Repaired and Many Projects A-go

The shop is back to work with limited crew to comply to social distancing and other CT requirements. We're excited to see our crew and have lots of good news to share with you.

First and most exciting, both 836 and 16 have been repaired. Galen undercut 836's compressor armature, solving the arching problem. Kelly repaired 16's wiring harness where a connector had been shorting out to the brake beam. The harness was opened, the connector re-taped and moved to the top, and the harness re-wrapped. The harness will be snugged up to keep it further away from the brakes. The car also got its west end brake stand cleaned. 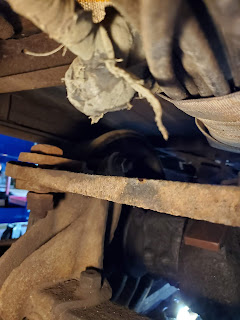 Using the time we've been given where no cars are running, we set about building something we've not had the luxury of having, a spare DH-16 compressor. Two high quality candidates were removed from the remains of Conn Co 2022, which was scrapped several years ago. Galen and Kelly disassembled one unit and cleaned the internals. The unit is now mostly reassembled and is awaiting its field coils and an armature from another unit to bake. Assembly will be completed once the electrical components are ready. 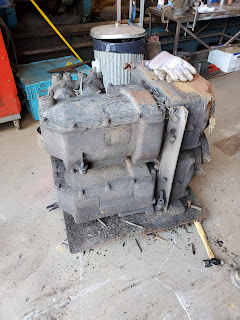 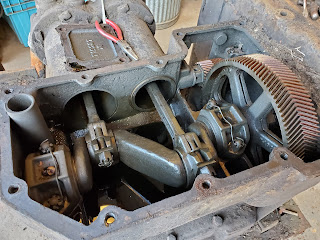 Inside a DH-16 compressor 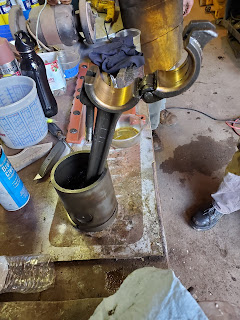 DH-16 piston after cleaning, ready to go back in the compressor

Thanks to Lou, Line Car 1 is sporting a freshly refurbished arc shoot set in its west end. He began the work of repairing the east end set today. Adam prepped and primed a pole hook and helped Kelly with cleaning up components for a catcher that will be used for the car. Catcher reassembly is complete and it is ready to go on the car. 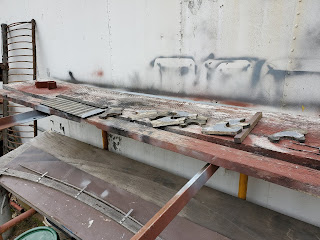 Parts for 1 dry on the outside workbench 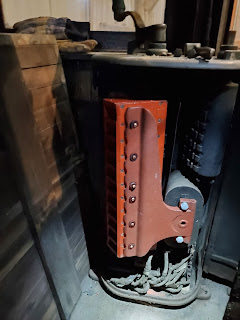 Galen began applying some much needed polyurethane to 4's seats. The coating will also have the benefit of protecting the seats when they are disinfected once the museum opens. Car 4 will be one of the first cars to return to operation. 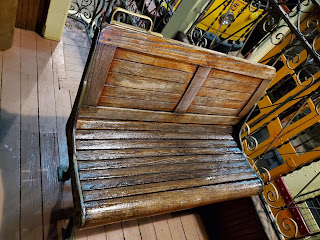 4's seats are starting to look better, they have many coats of polyurethane to go

John has completed the majority of the part work for 3001's trucks. He also straightened the first truck's frame. He plans to begin sandblasting work on the car next week. 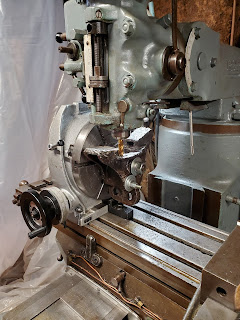 Brake shoe holder on the mill 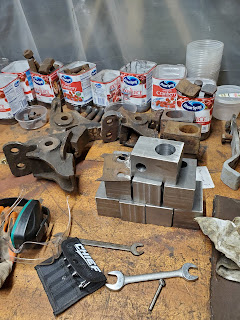 Parts ready to go for 3001, notice how the ones at the front have nice round holes while the older pieces at the rear have been worn out to an egg shape